Many artists aspire to develop unique artwork that is clearly recognisable as “theirs”.  Some artists may rapidly hit on their own signatory style with seemingly little effort.  Perhaps inspired by a flash of creativity and emboldened to experiment with a fresh approach, unshackled by the need to conform.

More likely though, artists with recognisable styles have simply toiled and persisted until, after many iterations, a style emerges that expresses their unique vision and energy.  The artist then needs to stay true to that unique style and produce a sizeable body of work with each piece clearly connected.

The common thread in these works may be a unique technique, pattern, shape, colour palette or perhaps subject matter.  With artists such as Arthur Boyd and Brett Whitely combining multiple distinctive elements to create their wonderfully unique artworks.

Considering the sheer volume of artwork in existence, and with the overload of digital imagery in modern life, it is perhaps becoming increasingly difficult to be truly distinctive. Which is why we’re so very pleased to present the unique and distinctive works of three highly talented and successful Australian artists; Jennifer Baird, Karen Bloomfield and Pauline Bailey.

We hope you enjoy reading about their backgrounds and achievements. To fully appreciated their artistic skills, simply click on any of the images in our Featured Artists section. https://www.ozartfinder.com/featured-australian-artists/

Jennifer Baird grew up in regional New South Wales, but also spent part of her early childhood in the highlands of New Guinea.  Her memories of the locals selling vegetables at markets in such a remote and beautiful part of the world has had a lasting impression.

In 1988 Jennifer moved to Sydney to study design and after six years, graduated with a degree.

In 1995 she travelled overseas to view the great art galleries of Europe and later travelled to parts of Asia and the South Pacific which became another inspiration in her work for many years.

After moving to Sydney, Jennifer found she loved the atmosphere of the markets on Bondi Beach.  Subconsciously relating these local markets to her childhood memories of New Guinea inspired her to produce many bright and cheerful paintings of market scenes and Sydney beaches.

Since Jennifer’s first solo exhibition held in 1996 at Bondi Pavilion, her delightful paintings produced in a variety of mediums have won many awards and recognition for her unique style.  Over the past twenty five years she has continued to exhibit regularly and has been involved with establishing two galleries in Sydney.  She has also completed many commissions and has had work published as art prints and book covers.

Now living in Canberra, Jennifer work can be seen at Trove Canberra, a cooperative of local makers and designers, located at Dickson Shops.

Karen Bloomfield was born in Canada and in her early childhood immigrated to Sydney with her family. She now lives on the beautiful Central Coast of NSW and works from a tiny rented studio in an artist cooperative at North Gosford.

Her artwork is clearly infused with her life experiences.  She sees beauty in so many mundane things, such as streetlights, an airport tarmac, industrial machinery, or glinting lights of a ship out to sea.  Although Karen does paint a variety of subjects, her collection of Industrial works is a signatory theme displaying her unique and distinctive style.

Karen completed her Diploma of Fine Art from the Newcastle Art School in 2014.  Whilst still attending art school, she held three solo shows, two collaborations and was invited to exhibit in numerous group shows. Her portrait of Fr. Jim Boland, completed for the 2013 Archibald Prize, hangs on permanent display at the NSW Police HQ in Parramatta.

Karen has received numerous awards and her work is held in private and corporate collections throughout Australia and overseas.  She is often sought after for commissions and is represented in several exclusive galleries on the east coast of Australia.

Pauline Bailey was born in Melbourne and currently lives in rural Gippsland where she works from the peaceful surrounds of her home studio.

In 2006 Pauline obtained a Certificate 1V in Visual Arts and Diploma of Art.  Now a practising artist for over ten years, she has painted in a variety of mediums, but mostly works in acrylic.

The urban environment is of particular interest to her and she frequently travels back to the city for inspiration.  Railway stations, dilapidated and disused buildings, pubs, cafés, shopfronts and other structures are among her favourite subjects, all painted in a style that is uniquely hers.

Pauline’s objective is to capture the feel of a particular place and give the viewer an insight into that space, revealing the many textures and colours to be found. The hidden beauty beyond the facade motivates her as well as exploring the depth and meaning behind the image.

Throughout the month of December, Pauline has been invited to display her work in an exhibition titled ‘City and Country’ to be held  at the ‘Mr. Burch Café’ located at 129 McKinnon Road, McKinnon, Victoria. 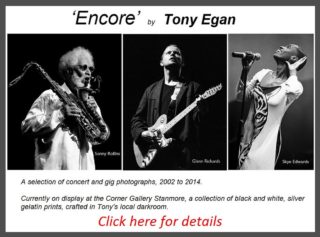