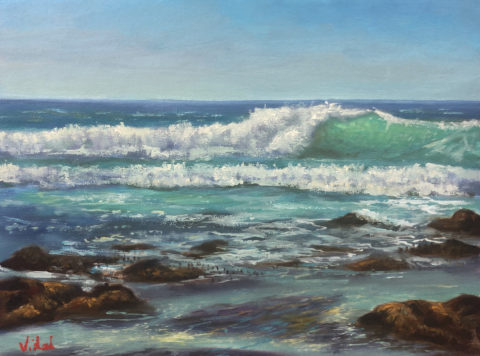 Currently living in Sydney, Chris was born in Malta and migrated to Australia in 2009. His love for the arts started when he was very young. At 6 years of age he developed an interest in drawing. For three years, at the age of 13, he attended the School of Arts at Palazzo de La Salle in Valletta, Malta. After finishing his academic studies Chris obtained his PhD from the University of Malta and worked as a scientist in various government and private laboratories and as a medical researcher in Malta and Australia. He worked in clinical biochemistry, food quality control and forensic genetics.

However his innate love for painting remained. More than ten years ago he started painting with oils and fell in love with this versatileand dynamic medium. Traveling around Australia gave him more inspiration and motivation, and since 2012, he started painting on a regular basis and exhibiting his work in various art shows around Sydney and surrounding areas. His daily practice of painting helped him to develop his skills and knowledge of painting especially the use of color very quickly. His scientific background also helps him to understand better the effect of light on the various pigments used in paint and so he considers each painting as a challenge to try to create the illusion of light using paint. He considers each painting as being a representation of reflected light from objects around us.

Dr Vidal's style of work was developed through years of experience in drawing and painting. He considers himself as a contemporary realist with his preferred subject being the landscape. Studying classical arts mainly drawing from life helped him to develop drawing skills and a keen eye for detail. During his studies he was influenced by the works of the great masters especially by the works of Caravaggio.  He is also influenced by the American landscape painters of the Hudson River school and by the Australian impressionists of the Heidelberg School movement.

As an artist he expresses himself in his paintings, especially when painting landscapes. His inspiration comes from his love of the arts, science, nature and what is around him. Nature inspires Christopher in many ways. Standing in front of a mountain makes him realise how short our life is, as although dynamically changing, these mountains have been standing much before human existence and will stand beyond our time. Trees also have a story to tell, as they stand the test of time constantly battling the weather and gravity while searching for light and water. Ocean, lakes and rivers remind him from where all life started. Strong waves and ocean currents sculpt our coastlines while maintaining the right temperature on earth necessary to support life. Looking up at the skies reminds Christopher of the vastness of the universe. The glorious moments full of spectacular colours when the sun sets behind the horizon at the end of the day is a time of reflection about the day that just ended, and that every precious second of life should be embraced.

Christopher's works are found in private and corporate collections in Australia and Internationally.

Pre 2013 – worked on several commissions for my local community in Sliema, Malta

Local artists that inspire me are Robyn Collier, John Wilson, Kasey Sealy, Andrew Tischler and Nataniel Provis amoung others.

“Alchemical Allusions” – Exhibition together with Robert Frost and Clayton Micallef.

Community Redfern Night Markets – Every first Friday of the month

All Year round Exhibition

My artwork was chosen as a design for a commercial by FlipDivision (http://www.flipdivision.com/)

For full details on dates and availability, either contact Chris via email or visit his website;    http://www.christopher-vidal.com.au