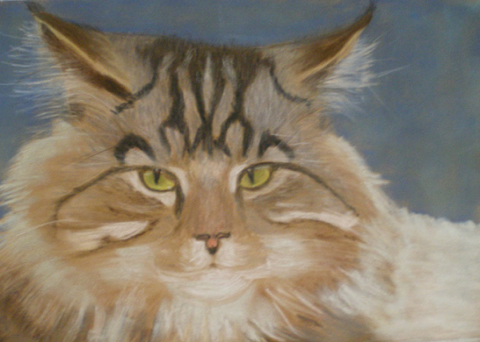 I retired to Ulverstone from Kalgoorlie with my husband Max in May 2012 and immediately began a love affair with Tasmania, especially the North West Coast. Tasmania is an artist’s delight, providing inspiration around every corner. I had always wanted to continue painting from my schooldays and now I had the opportunity.

A late bloomer, I have only been painting since mid-2012. I am largely self-taught, apart from school days when I had attended the weekly art lessons from the ages of 13 through to 15 years.

I started painting with acrylics and oils then watercolours, then I discovered pastels and fell in love!

In 2013 I attended pastel artist June Wilson’s workshop at Latrobe and I have sought watercolour tuition at Evelyn Antonyson’s studio at Forth.  During 2014 I completed Certificate IV in Visual Arts at Devonport TAFE.

In 2014 I held my first solo exhibition at the ArtsCape Gallery, Wynyard and I have continued to hold solo exhibitions in Burnie, Sheffield, Ulverstone and Wynyard to the present day.

My primary interest is painting the incredibly beautiful land and sea scapes of Tasmania.  I have been surprised with the paintings I have produced and I am on the road to realizing my dream of capturing the wonderful light over the picturesque visas of Tasmania. I am now increasing my range of subjects by painting scenes from other Australian states, for example, as in North Queensland Stockman and from my travels throughout Europe as shown in Towards the Grand Canal, Venice.

I like to challenge myself, as testified by my foray into painting animals a couple of years ago. I have found a new medium which gives depth to animal paintings - as I attempt to catch each animal’s personality - I use soft pastels and pastel pencils on velour.

I find painting both relaxing and fulfilling, and in my art works I attempt to engage the viewer in the subjects I portray, be they landscapes, seascapes, buildings or animals.  I immerse myself in my latest art project and I gain a sense of satisfaction from each new painting as I reach for perfection - an allusive state!

I am humbled by the interest shown in my art and gratified that so many people love and buy my paintings. I have a variety of paintings in private collections throughout Europe and the Americas, as well as most Australian states and territories. I take commissions for both domestic pets and Tasmanian wildlife.